Are Ultrarunners Masochists or Hedonists? 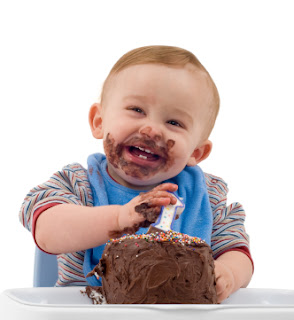 Running long is one of my favorite things to do, but I will be the first to admit that after a certain point it turns into sheer torture. In fact, nearly every time I finish an especially long run I find myself wondering why I do these things to myself. The question of when (and how) I became such a masochist has puzzled me for a while, especially since everything else in my life suggests that I am anything but. I mean, I take hot showers (I don't think I would want to live in a world without hot water), I intentionally moved to a place without humid summers, and I never watch Glee.
The answer finally dawned on me today as I was driving home after a 27 mile training run and trying to keep my spasming legs from causing a wreck. I was trying to remember why running 27 miles had ever seemed like a good way to spend a Saturday morning when I suddenly realized that I go through the same thought process when I plan long runs as when I eat an entire cake by myself:


Before: "Wow, I'm really enjoying this. I want more. If this much is this good, then surely 8 times as much would be 8 times better. That sounds like a great idea."

After: "THAT sounded like a good idea? Good call, genius. What the *&%# is wrong with you, anyway? You know you're about to throw up, right? From now on, why don't you have someone else make these decisions. Like, for example, someone who isn't an idiot."

My epiphany was that I'm not a masochist at all--I'm a hedonist, a glutton. I'm the guy who can't turn down that 2nd (or 3rd, or 4th) slice of pie. I don't go on long runs because I want the pain, I do it because I keep wanting more and more fun and don't have enough self-control to say no until after I feel terrible and am still 9 miles from my car (like today).

So now I can't help wondering: are other ultrarunners a bunch of cold shower-taking, cinnamon challenge-performing, Glee-watching masochists? Or are there others like me out there who just aren't sharp enough to remember how miserable they felt the last time?