Welcome to my blog.  My name is John, and I am a 30 year old runner, musician, and sometime lawyer living in the mountains of eastern Arizona with my fellow runner wife.
I have been running since, well, technically since I was a little kid.  I started running to work out in college and continued sporadically through law school but never enjoyed it until I spent a few months living in the outskirts of Tucson in late 2008.  It was then, running every day around sunset through the washes which meander through the lush Sonoran Desert, that I fell in love with running.
Since then, running has been both a joyful pastime and a pathological need.  It has also been an occasional source of frustration as I discovered that I seem to be exceptionally injury-prone.  After two devastating injuries in a row kept me from being able to run for the better part of a year, my running life underwent a cosmic shift with my purchase of a pair of then-cutting edge Vibram FiveFinger KSOs in the late summer of 2009.  I haven't run in a pair of cushioned shoes since, and have been watching the ongoing barefoot/minimalist trend with barely contained revolutionary fervor.
My hope for this blog is that it will a source of information for those less experienced than I (a few of you) and a source of amusement for everyone else (most of you).  I hope you enjoy. 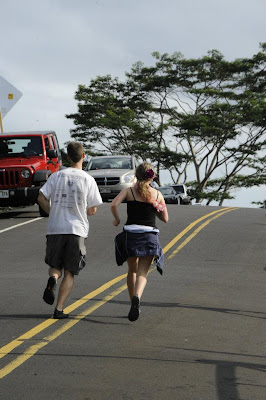