Many of you may know of "Barefoot Ted" McDonald from Christopher McDougall's book Born to Run.  I have never met him, but based on the videos you can find of him on the internet, he seems like a sharp, thoughtful person.  One offhand comment he makes in this lecture has stuck with me for a while now.
Around 2:25 into the video (which is worth watching to the end), in the course of introducing the story of how he found barefoot running, Ted mentions his "personal journey to find a way to run joyfully."  When I first watched this I was struck that he frames his story this way.  Many barefoot "testimonials" begin with a quest to conquer persistent injuries (including Born to Run, which begins with McDougall asking "why does my foot hurt?") or to run more naturally. While these are real and valuable benefits, Ted puts his finger on barefoot running's best reward of all: a reawakening of that pure joy of being in motion which we all felt as children.  Watching the video, it suddenly dawned on me that this has been my journey as well, and that while I thought my goals were to run healthily, and naturally, and quickly, ultimately those were all just means to a much more satisfying end.


"Run joyfully" has become a mantra to me.  I use it in times when I have begun to lose perspective in my running, such as when I grow moody at the end of a long run, or when my race goals have caused me to forget why I started running in the first place.   I encourage you to try it as well. 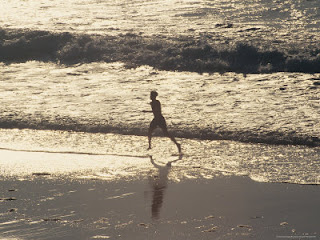