Runners You Should Know: Zola Budd 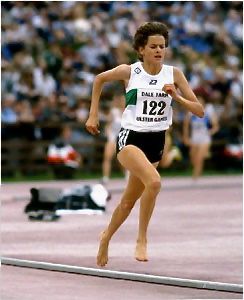 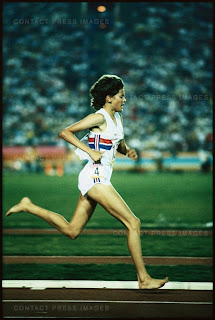 You know those dorks people who insist that barefoot running must be stupid because world class athletes all wear shoes? Would you like a ready-made retort? Great. Repeat after me--"Tell that to Zola Budd." A track runner who reached her prime in the mid 1980's, Zola Budd is mainly known for three things: breaking a bunch of world records, competing in the 1984 Olympics, and doing it all barefoot.

Zola grew up in a small, hilly town in South Africa called Bloemfontein. Like most promising young African runners, she grew up running barefoot. In 1984, at age 17 and running for her local high school, she broke the 5k world record--barefoot. Later that year, she ran in the Los Angeles Olympics--barefoot.  In 1985, she broke the 5k record again and won the World Cross Country Championship--again, barefoot. In 1986, still a teenager, and still running barefoot, she again won the World Cross Country Championship, this time barefoot on a muddy course.
In a recent interview, Zola was asked what her current feelings on barefoot running were. "I'd still prefer to race barefoot on the track and grass.  On the road there are some great shoes on the market (Newton) which simulates barefoot running.  I still believe if you approach barefoot running conservatively and pick the surfaces on which you run carefully, it enhances your running form and performance." If this sounds almost exactly like something you would hear on a modern barefoot running forum, it's because it is.