Why Ultrarunning is the Most Christian Sport

About a month ago Emily and I spent a weekend at the Javelina Jundred 100 mile ultra in Fountain Hills, AZ. We volunteered at an aid station from 3-11pm, hung out with some really great people until 2am, and then I paced a runner for her last 24 miles (we finished a little after 9am). I had run a couple of 50ks and was toying with the idea of running longer distances someday, so this weekend was meant to give me an idea of what a 100 mile race really looked like. What I saw made a huge impression on me, but not for the reasons I expected.

I expected feats of endurance and the human will among the runners, and I did see that. But what really made the biggest impression was seeing the non-runners--the volunteers, pacers, crew members, and friends and family--and the way they gathered around, supported, and loved the runners to the finish. I couldn't help but be reminded of Jesus washing his disciples' feet, of the Good Samaritan, or of the command to love our neighbor as ourselves. In fact, I had two phrases running through my head the whole weekend: "Christ-like love", and "a servant's heart." Those two phrases sum up for me what is special about ultrarunning, and why I want to continue to be a part of it.


"Do nothing from selfish ambition or conceit, but in humility count others more significant than yourselves. Let each of you look not only to his own interests, but also to the interests of others." (Philippians 2:3-4)

Last week Jason Robillard, in the midst of what seems to be an extreme case of burnout, posted an article titled The Narcissism of Running. Shortly after Vanessa Runs posted a response titled Are Ultrarunners Narcissistic and Self-Centered? In Vanessa's post she lists numerous times in her experience when ultrarunners have taken the time to stop to help other runners who were lost or discouraged, or even non-runners who were broken down on the side of the road. I have to say this is consistent with my (limited) experience. Runners, especially ultrarunners, are usually eager to help and encourage each other, and very few--even among those who have a chance of winning--act as if a race were the zero sum game it theoretically is.

"But the fruit of the Spirit is love, joy, peace, patience, kindness, goodness, faithfulness, gentleness, self-control; against such things there is no law." (Galatians 5:22-23)

Reading that list, I'm struck by the fact that I saw every one of those qualities demonstrated at JJ100. Many of those qualities are needed to finish a hundred miles, and all of them are required to deal with someone who is in the process of attempting it. I saw volunteers cheerfully fill the bottles of runners who forgot to thank them, girlfriends changing their groaning boyfriends' disgusting socks, and elites keep glassy-eyed back-of-the-packers company at 4am. What I didn't see was slapping, yelling, or any enforcement of a no-thank-you-no-water policy.

Now, I hope to run a 100 miler some day and the main reason why I decided to volunteer and pace at JJ100 was to find out what to expect. In other words, my reasons for helping out were mostly selfish--although what I did was kind of miserable, I chose to do it because I was getting something out of it. This wasn't the case with the other people there. Most of the volunteers and all of the pacers I met were runners who had been around the block and knew exactly what the experience would look like. They weren't there to learn something; they were there to help.

Pacing is pure service. It means tending to a runner's physical and emotional needs at a time of weakness, with no reward, no matter how badly you feel yourself, and no matter how badly they treat you (I was fortunate enough to have a runner who was always nice, but you hear stories). What's really remarkable about ultrarunning is that pacing isn't confined to a particular class who serve the elites (such as domestiques in bicycling, where some people will spend their whole careers as helpers for the big names, or baseball, where even the titles given to ballboys and batboys are demeaning). Instead, pacing is something the elites take pride in doing as much as anyone else. At Javelina Jundred, two of the big name runners were Hal Koerner (two-time winner of Western States, etc.) and Jenn Shelton (famous from Born to Run and for being an amazing runner and all around awesome person). And how do elites like Hal and Jenn spend their free time? Well, here's a picture of Hal at Western States this year: 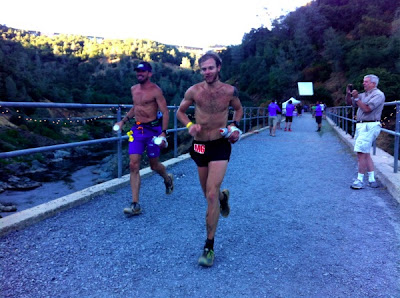 More precisely, that would be Hal pacing Timothy Olson at Western States this year (the same year as Hal's win at Hardrock 100). 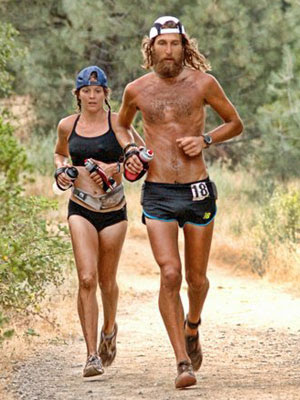 In stark contrast with every other sport, ultrarunning elites at the height of their success will choose to put themselves in a subservient role, a role of providing service. This is part of the culture of service in ultrarunning that extends from the people setting the course records to the people barely finishing.

What all of this adds up to is a sport infused with love, generosity and selfless service, where service is emphasized and celebrated. Now, can you run ultras and be a rude, selfish, narcissistic person? Of course. My point is that the more you immerse yourself in the ultrarunning community--the more you run, and pace, and crew, and volunteer--the more you will be exposed to real, Christ-like love, and I figure it has to wear off eventually.

Maybe it's all pointless, but at the very least it's good practice for how we should be behaving in our everyday lives. It's like how people say that you should behave the other six days the way you behave on Sunday. For the ultrarunning community, I'd say that's doubly true.

"I have fought the good fight, I have finished the race, I have kept the faith." (II Timothy 4:7)