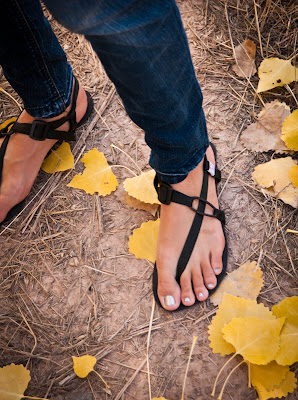 In many ways, the state of the minimalist shoe market today is similar to that of the state the airplane industry around the turn of the 20th century. There are a lot of people trying a lot of different ideas--some great, some awful, some just strange--and it can be a lot of fun to watch.

Adding to the variety is the fact that the people making the footwear are coming to the minimalist fold from various directions. Barefoot Ted (founder of Luna) is a distance runner, Steven Sashen (founder of Invisible Shoes) is a sprinter, and Terral Fox (founder of Unshoes) is an "outdoor adventure enthusiast" and a longtime wearer of sport sandals. It's really pretty fascinating to see the variety of designs that these people come up with, and how influenced they are by the backgrounds of the people designing them.

Basics
Unshoes is a small business with three employees located in southern Utah. As I mentioned, the owner and founder is Terral Fox, an avid hiker, backpacker and river rafter. Unlike many of us who came to huaraches as an alternative to heavy running shoes, Terral came to them as an alternative to sport sandals like Teva and Chaco. This explains why he shied away from traditional laces and started using nylon webbing instead (which Unshoes was the first to do).

Terral originally just made sandals for his own use, but started selling them on Etsy in May 2010 after his wife suggested it. Unshoes has been selling from its own website since April 2011. All of the sandals are custom-made by hand in Utah. The company also has hands (feet?) down my favorite barefoot-related logo.

Currently there are three adult models, the Wokova, the Wokova Feather, and the Pah Tempe (the sandals are named using Paiute words). Unshoes provided me with pairs of the latter two for this review.

The Wokova Feather is a lightweight version of their original model, the Wokova. The Wokova Feather uses a 5mm Vibram Newflex sole, weighs under 3 ounces and costs $45. (All Unshoes are custom-made from a foot tracing and this is included in the price.) It is designed for running, backpacking and casual wear. You have your choice of a black or brown sole and black, blue, olive or red webbing.

The Pah Tempe is designed to be more secure in water and steep terrain, and for people who don't like having a strap between their toes. It comes with two different soles, a 6mm Sport Utility or 10mm Newflex (which is what I chose). With the 10mm sole it weighs around 4 ounces and costs $62 ($60 with the 6mm sole). Again you have a choice of colors: brown or black for the sole, and tan, rust, black or olive for the straps.

Construction
The soles are the incredibly durable Vibram rubber familiar to most huarache aficionados, while the straps are made from extremely strong nylon webbing that any rock climber would immediately recognize. Both sandals use plastic buckles to adjust the straps. In addition, the Wokova Feather has an elastic loop attached to the straps so that once you get the sandal adjusted you can slip them on and off without readjusting. The Pah Tempe uses a single piece of webbing over the toes, instep and and front of the ankle with no elastic, which means that to get the sandal on I had to loosen the strap all the way to get my foot in and then adjust the tightness of the strap in each of those three areas. Not the end of the world, but definitely less convenient than the Wokova Feather.


Based on the materials used, there's the potential for these sandals to last a long time. Overall, the construction looks very solid. My initial concern was with the parts of the straps that touch the ground, since nylon webbing is strong but not known for being abrasion-resistant. Unshoes has planned for this by covering those parts with a protective hardening adhesive to reduce abrasion. Terral says that most pairs last a few years, depending on use.

Appearance
The Wokova Feather gets high marks for aesthetics. It has the polished appearance of a sandal you'd buy in a store. In fact, it's one of the few minimalist shoes my wife actually likes me to wear.

In contrast, the Pah Tempe looks a bit rough, almost home-made. On the other hand, at least people won't say you look like a gladiator.

Comfort
The Wokova Feather also gets high marks for comfort. In fact, as far as casual use goes, I'd say it's the most comfortable sandal I own. The tubular webbing is soft and the elastic means that you don't have to tighten them too much to get them to stay on.

The Pah Tempe is reasonably comfortable as well, though not in the same "ooh... aah..." sort of way. The webbing feels fine against the skin, although it covers an awful lot of it. If you wear sandals so you can feel the breeze on your feet, you may not be as happy with this sandal. My big complaint is that when I did an 18 mile trail run in them I ended up with huge blisters on the big and little toes of my right foot. That may just be me, but as far as distance running is concerned one inherent disadvantage of the Pah Tempe compared to a traditional huarache is that the Pah Tempe has material in contact with many parts of your foot that a huarache doesn't. 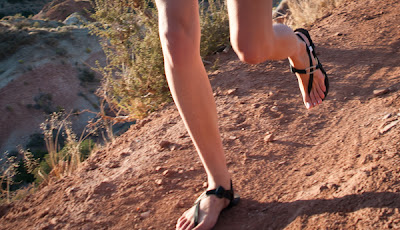 Performance: Running
I have to confess that my testing methodology is inherently slanted against Unshoes since they are designed for a wide variety of outdoor activities and I just used them for distance running. With that in mind, let's talk about how they handled it.

The Wokova Feather is obviously not intended for serious trail running. The 5mm sole just isn't very much protection and even small gravel is uncomfortable. The flip side of that is that the groundfeel is fantastic and rivals that of the Invisible Shoes Connect. The straps also aren't secure enough for technical running, or even hiking on especially uneven terrain. (This is true of most slip-on sandals and is one of the inherent limitations of using elastic in laces.) Fortunately, it handles road running much better. Here, the groundfeel is a plus and aids proprioception. The straps are sufficiently secure for normal road running. It's light weight and the ability to roll them up also make it one of the best options if you want to carry backup footwear on barefoot runs. 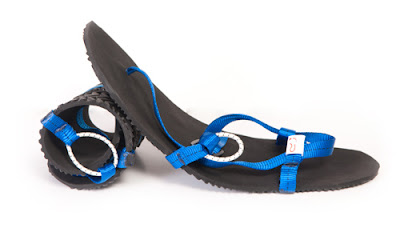 With the 10mm sole (which appears to the be exact material used in Luna's capable trail model, the Leadville), the Pah Tempe is twice as thick as the Wokova Feather and more than capable of handling virtually any surface for any distance. The level of protection is comparable to the Luna Leadville, Tanner Sandals Solution, or Merrell Trail Glove, my go-to choices for long distance trail running. The straps are also extremely secure; I ran 18 miles on very rocky, hilly terrain and never had to slow down because I was worried about my feet slipping. When I first got the sandals I wondered if my toes would slip off the end on steep downhills but this was never a problem.

One thing that is a problem is that the strap attaches to the outside front of the sole a significant distance from the edge. Not only does this mean there's wasted space on the sole, but when running I found that there was a tendency to push my foot slightly off the inside of the sole, exposing my arch to the ground. (The Wokova Feather does this too but only slightly, since its outside strap actually attaches to the edge of the sole.) This probably wouldn't have been a big deal except that one of my runs was on a trail with a lot of volcanic rock. Ouch.


The main problem with the Pah Tempe from a runner's perspective is that the front strap goes straight across the toes, which largely prevents them from splaying. This is especially annoying when you consider that one of the big advantages of huaraches is that they usually allow completely unfettered toe movement. It's possible to loosen the front strap to give them more room but this allows the front of the sandal to flop around, so it isn't a real solution.


On the other hand, the Pah Tempe has some real advantages over traditional huaraches. For one thing, there's no lace between the toes which should really appeal to some people. Another plus is that not only can you wear socks, you can wear any pair of socks you want. On several cold morning runs I wore thick wool hiking socks, which were a huge improvement over thin Injinjis.

Performance: Non-Running
This isn't a normal category for my reviews but the focus of Unshoes is different enough that it seemed warranted. Unshoes, especially the Pah Tempe, are extremely well-suited to a much wider variety of of outdoor activities than are traditional huaraches. If you do a lot of hiking the Pah Tempe may be your best option on the minimalist market today. The straps are extremely secure in every direction (which is not true of huaraches) so they will work well for hiking and backpacking over any terrain.

The Wokova Feather is not as secure and I wouldn't want to do a lot of hiking or scrambling on uneven surfaces. However, it should work fine for easier trails. One of its suggested uses (which it would be perfect for) is as a second pair of footwear to bring when backpacking, where its light weight, comfort, and packability would really shine. 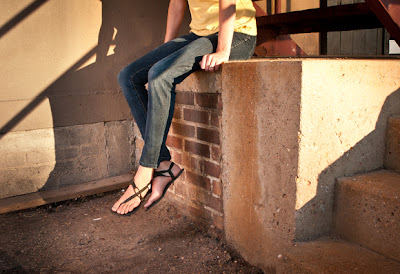 Conclusion
Unshoes are an interesting and creative addition to the minimalist sandal market that fills a number of holes left by traditional huaraches. Although I don't like them as much as my favorite huaraches for long distance running, depending on what you are going to be doing they may be the best choice for you. The Wokova Feather is one of the best sandals on the market in terms of groundfeel, light weight, and comfort. The Pah Tempe for its part has several advantages: no strap between the toes, the ability to be worn with any sock of your choosing, and the fact that it's one of the few minimalist competitors to Teva or Chaco in the all-purpose sport sandal field.