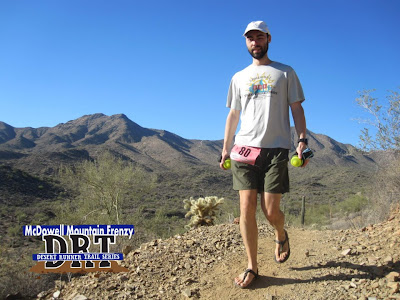 It's strange how things end up sometimes, especially when it comes to the human body (and super-especially when it comes to my body). DNF'ing at Pass Mountain 50k was a demoralizing, embarrassing experience that apparently shattered my ambitious plans for the year (it was number 3 of the 8 ultras between September and March that I was signed up for). Still, as much as I'd had my heart set on finishing the races I'd signed up (and paid) for, the last spark of common sense in me told me to not be an idiot and to take time to heal before I did real damage. So, I went down to Tucson for some Graston Technique therapy, cut out most of my running, and resigned myself to running a shorter (non-ultra) distance at McDowell Mountain Frenzy the following month.

Fast-forward to four weeks later. It was 7 or 8pm the night before the race and Emily and I had just finished setting up our tent when it occurred to me that both of my Achilles tendons felt pretty good. I tried bouncing up and down for a little bit. No pain at all. That's weird. A thought--probably a stupid thought--started to form in my head. I wonder if they'd last through a 50k... One fierce internal argument later, I decided to wake up in time for the 50k and see how I felt then.

Amazingly, I still felt fine the next morning, so I said what the heck and lined up with the 50k runners. This would not be a particularly easy race to drop from but I promised myself that if things weren't going well I would call it a day, even if it meant walking 10 miles back. I really didn't want it to come to that, so I started out extremely slowly, even by my standards. 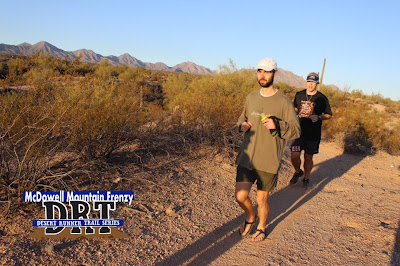 10 miles in, the backs of my ankles still weren't painful but they felt a little bit off, so I kept the pace slow. It wasn't until mile 15 or so that I felt warmed up all the way, but once I was, my legs started feeling better and I let myself run more. In fact, over the next 10 miles I felt better and better.

By the time I came through the start/finish area at mile 25 I felt fresh as a daisy. I was a little bit tired but not much, and my legs felt the happiest they'd felt in over a month. On top of that, my watch read around 5:30-something, which put me on track for a PR. I wasn't sure how it had happened, but it had somehow turned into a good day for me. I refilled my bottles and pockets and took off like the proverbial bat out of H-E-double hockey sticks and covered the last 6 moderately hilly miles in under an hour (which for someone with a road marathon PR of 4:25 is borderline supersonic). I crossed the finish line in 6:35, 43 minutes faster than Paatuwaqatsi and over an hour faster than Cave Creek. 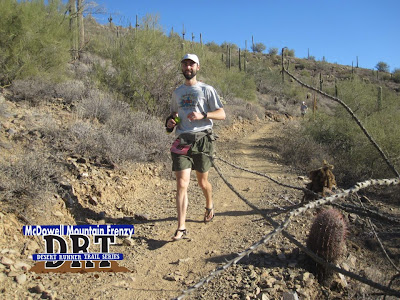 I couldn't believe how well the day had gone. Not only had I run a PR, but I had felt great doing it. It was my first 50k in which I genuinely felt good the whole race, instead of wishing for death to take me like I usually do the last few hours.

So how did this happen? Beats me. The moral of the story, I suppose, is once again to listen to my body, whatever it is trying to tell me. I did that when I DNF'd at Pass Mountain and I did it when I ran here, and both ended up being the right decisions. I also think my injury ended up working to my advantage. First, being constantly worried about my legs forced me to pace conservatively, which gave me my first negative-split ultra. Second, it forced me to take some time off from running, which in retrospect was probably rest I badly needed. Even aside from the injury, I didn't enjoy Pass Mountain because of how lethargic I felt. It was a beautiful day but and a scenic course but I couldn't muster any enthusiasm for running. Looking back, I was exhibiting textbook overtraining symptoms. After four weeks off, I was ready and eager to run again.

Due to my extreme laziness, I'm writing this five weeks after the race. Since then, I've been training moderately but consistently for Coldwater Rumble on January 19, where I will be attempting the 50 miler. Based on McDowell Mountain I'm cautiously optimistic, but if I've learned anything from the experience it's that you never know what will happen.