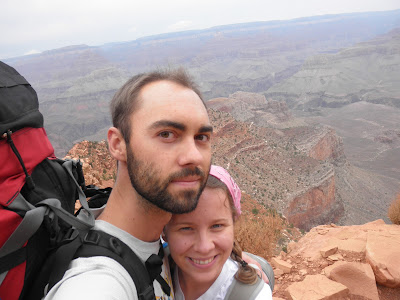 Like many Arizonans, my wife Emily is not from the state originally. She grew up in Mississippi, and until two years ago was your average amiable-but-indoorsy, fried chicken and butter-eating southerner. (Well, above average, but I digress). However, again like many Arizonans, since moving out west she has undergone a remarkable metamorphosis into a dyed-in-the-(Smart)wool, outdoorsy, whole foods vegan, all-my-clothes-are-technical-fabric marathoner/triathlete southwesterner. Well, almost. There was one element missing from her transformation into a true Arizonan, and that was the fact that she had never been to the bottom of the Grand Canyon. This week we fixed that.

Friday
I had Friday off and a 15 mile run planned, but on a whim we called Phantom Ranch (a small dorm at the bottom of the canyon) to see if they had any last-minute cancellations (in the warm months they book months in advance). To our surprise, they did--that night and the next. We booked the beds, threw everything in the car as fast as we could and took off on the four hour drive to the south rim. After parking at the visitor center, we threw all the food in the pack and hustled to catch a bus to the South Kaibab trailhead. 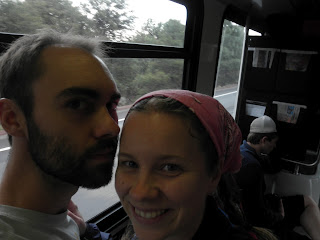 Once off the bus, we started down the trail about 3:45pm. Although summer weather in the canyon is famous for being blisteringly hot (and the South Kaibab is famous for having no shade), we lucked out; the day was cool and overcast, with occasional showers that only hit us near the end of the hike.

It's hard to overstate how beautiful the canyon is, and the South Kaibab has most of the best views. Before long we were also getting great views of the river as well. (Click on any of the images for a larger version).
By 6:30 we were crossing the river on the "black" bridge, an old suspension bridge built in the 1920s. 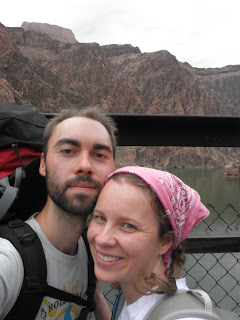 Its history is pretty amazing. The huge cables were too big to bring down by mule so groups of men had to carry them down the switchbacks together.
Fifteen minutes later we were checking in at Phantom Ranch. By this point we were tired, it was getting kind of dark, and rain was falling off and on, so we didn't take any more pictures, but here is one of a mule deer from the next day:
We were too cheap to reserve dinner at Phantom Ranch ($25 per person for stew is a bit much for us), so once we dropped off our stuff at the dorms we took our sack dinner to the river and ate with our feet in the water while the sun set. It was idyllic. Also, red pepper hummus with sugar snap peas is the best post-hike food ever.

We walked back to the dorms (there are separate dorms for men and women) in the dark and settled in for bed. We had decided to go part of the way up the north rim the next day so I set my phone alarm for 5am and went to sleep. Emily did the same until she was awoken by a family who showed up at the dorms around midnight; apparently they had underestimated the time it would take them to get down by... a lot... and had ended up hiking the last few miles in the dark.

Saturday
It seemed like I had only been asleep for a couple of hours when my alarm went off. I dragged myself out of bed and started getting ready for my run. Our plan was to leave separately, with me going for my regularly scheduled 15 miler and meeting Emily at Ribbon Falls (about halfway up the North Kaibab) for lunch. I was dressed and about ready to head out the door when I looked out the window. It was pitch black outside. Odd. I thought sunrise was supposed to be around 5:15; shouldn't it be light by now? I dug my watch out of my backpack. 2:10am. Son of a hamster! Somehow the time on my phone had gotten changed. I reset it for 5am--again--and tried to fall back asleep.

I did--briefly. It turns out there is a 4:30 wake-up call whether you want one or not. Now very much awake, I headed out on my run. The lower half of the North Kaibab is the most runnable section of the Grand Canyon trail system. It follows the Bright Angel Creek through a small box canyon for three miles before the canyon widens out a bit.
In contrast to the punishing grade of most of the trail in the canyon, in this section the trail only climbs as fast as a quick-moving stream. I ran the seven or so miles to Cottonwood Campground, refilled my bottles, and headed back down to Ribbon Falls, which is at the end of a short side trail off the North Kaibab. As luck would have it, we got there about the same time--which wasn't lunch time, but life isn't perfect. 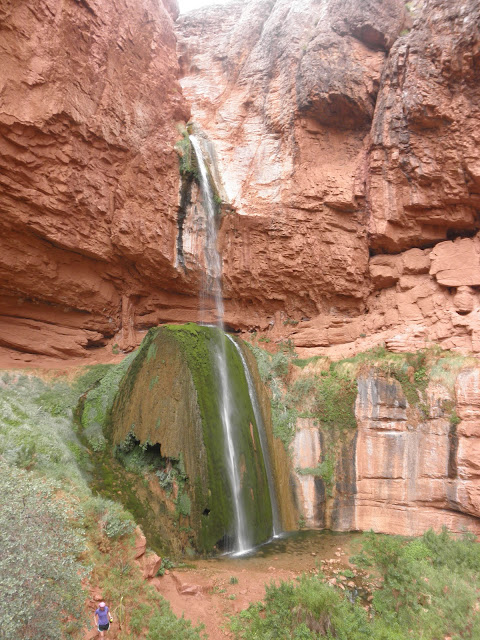 ...though it's hard to believe it when you're at a place like this. 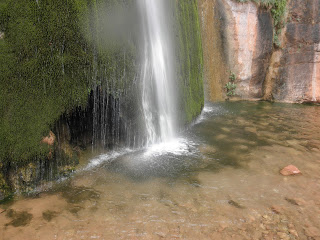 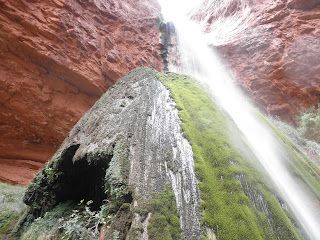 We both agreed that Ribbon Falls was one of the most idyllic places we have ever seen. "Fern Gully" was how Emily described it. The photos don't do justice to the place. They also don't show you how thick the moss was, how clear the water was, or how cool and refreshing the air felt. 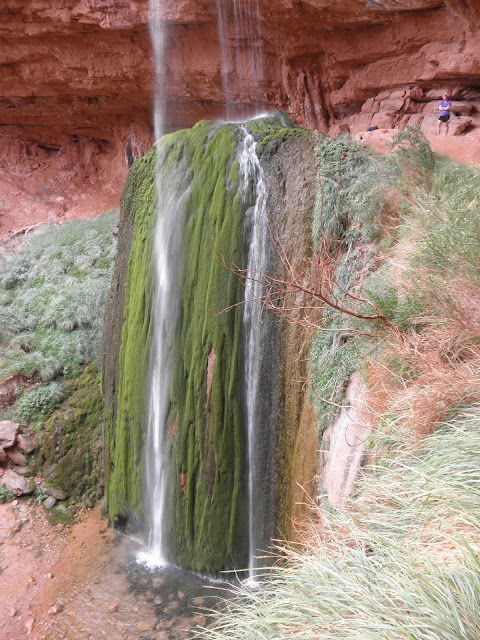 There was a trail that took us up behind the waterfall, and this is where we decided to eat. 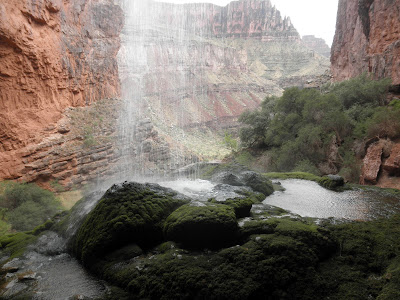 After we left the falls we headed back to Phantom Ranch. After soaking our feet in the Bright Angel Creek, we ate our lunch at the canteen and played Scrabble.
Everyone always talks about getting lemonade at the canteen, so we got some too. It's pretty good.

One of the unique things about the Grand Canyon is it's the only place in the U.S. where mail is carried by mule. All of postcards sold at Phantom Ranch have this stamp:

After the Scrabble game finally ended (Emily won), we went to a couple of ranger talks (it's been 20 years since a confirmed snake bite in the canyon, but 7 people are bitten by squirrels every day), had dinner by the river again, and hit the sack.

Sunday
Another 4:30 wake-up call. By this point in the trip we were both exhausted but there was only one way out (actually two, but faking a snakebite to get a helicopter ride out seemed a bit extreme). On the way past the mule corral there was a mule deer nonchalantly having breakfast with the mules.
By sunrise we were crossing the "silver" bridge over the river.
As we were crossing, something suddenly dawned on me--the river had changed color overnight. This is the color the river was Saturday evening:
And this is the color of the river Sunday morning:
Incidentally, this is the bridge the mules don't like crossing.

Soon we were across and headed up the Bright Angel Trail.
It's longer than the S. Kaibab, but it has a lot of water sources (the S. Kaibab has no water at all) and so seemed the smart choice for what promised to be a warm day. 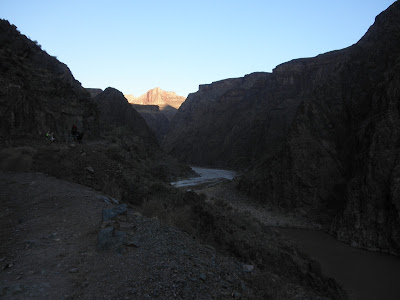 ...especially since the sun was rising on the canyon quickly.

The trail follows Pipe Creek for several miles until you get to Indian Gardens, which I consider the prettiest of all the campgrounds in the canyon. 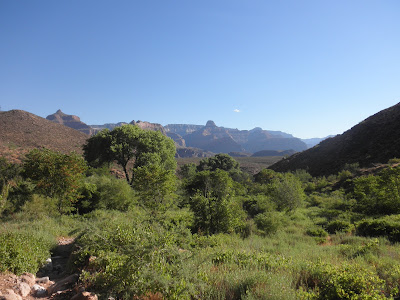 It was actually a location used for farming by Native Americans over several millennia. We stopped under a rock overhang for a snack... 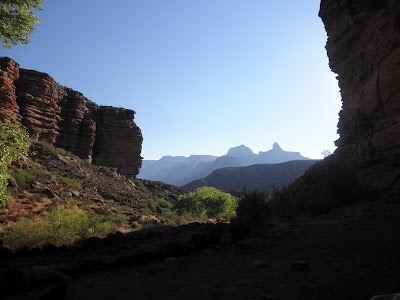 ...and then continued on our way.
Unfortunately, the bulk of the climbing occurs once you pass Indian Gardens. There is a long section near the end called Jacob's Ladder which is both steep and very sunny.
One bright spot of this section was encountering a very puzzled looking big horn sheep.
Eventually we made it to the top and had lunch at the Bright Angel restaurant (in the hotel of the same name). It's a great place that's been around since the Harvey girl days. Then it was four hours back to Show Low through yet more rain. 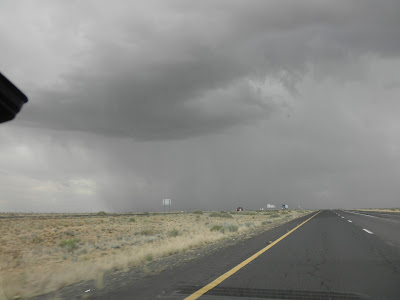 And that was our relaxing weekend.
Posted by bf in az at 4:30 PM